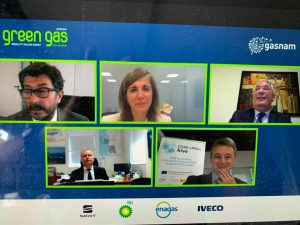 The maritime part of the Gasnam Congress took place on September 23rd; the speakers proceeding from different institutions (both public and private), claimed Spain as a reference in the bunkering of liquefied natural gas (LNG).

The Secretary General of Transport, María José Rallo, presented the new mobility law and the strategy for safe, sustainable and connected mobility in 2030, which places “low emission mobility” as one of its key pillars. She stated, in relation to the use of LNG in transport, that “Spain has positioned itself as a reference for the supply of LNG to ships and the CORE LNGas hive project is a successful example of public-private collaboration that has allowed the development of the sector”.

Furthermore, she was confident about the potential of LNG in the heavy segments of transport, especially in the maritime and railway segments, where Spain has been leading the development of practical experiences at European level since 2014. She considers that in railway field synergies must be created and that all the potential that the use of gas can have must be explored”. In this sense, she mentioned the project of the locomotive between Huelva and the Dry Port of Seville, part of the LNGhive2 strategy.

At the Congress, which counted with the attendance of representatives from Enagás, Puertos del Estado, Port of Huelva, Port of Tenerife and Balearia, Bureau Veritas, Naturgy, CEPSA and the Jovellanos Centre, among others (all of them are partners in the CORE LNGas hive project or the LNGhive2 strategy), the fact that LNG is the best alternative for decarbonisation of maritime transport has been stressed.

Marcelino Oreja, Enagás CEO, highlighted that “in 2020, LNG bunkering operations carried out in Spain have been multiplied by four compared to 2019, which is a symptom of the success of the CORE LNGas hive project”. And presented the information prepared jointly by Enagás, Gasnam and Sedigas “Sustainable mobility is already possible with natural gas”.

Claudio Rodríguez, Enagás’ General Manager and Gasnam’s maritime vice-president, stressed that “Spain is a benchmark in the bunkering of LNG to ships that use this fuel, and is committed to becoming the first and most competitive LNG hub in Europe”.

Fernando Impuesto, Enagás Emprende General Manager and Coordinator of the project, said that “these LNG bunkering operations to ships in Spanish ports have multiplied, largely thanks to the developments carried out within the framework of the CORE LNGas hive project co-financed by the European Commission”. He also highlighted that Spain’s strategic positioning in LNG bunkering has been strengthened thanks to the EU’s support also in the follow-up of this project through the LNGhive2 strategy which, among other developments, will allocate 20 million euros to the construction of two new LNG bunker vessels for the ports of Barcelona and Algeciras, which is a recognition by Europe of the role played by LNG in the decarbonisation of the maritime sector and in improving air quality in ports.

This is just one of the many advantages of public-private cooperation for the development of the sector. Fernando Impuesto, “believes that the objective now is to develop projects based on meeting real client demand and investing in assets that will enable the bunkering chain to be boosted in Spain”.