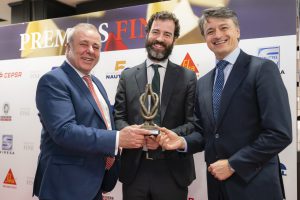 CORE LNGas hive has been awarded during the IV FINE 2019 Awards with a special recognition for its contribution to the port sector.

The prize giving ceremony took place during a gala dinner held on February 12th in Bilbao, coinciding with the World Maritime Week; among the ceremony attendees there were the main representatives of the maritime sector, including ship-owners, shipyards, institutions, associations and auxiliary industry.

This recognition has been achieved thanks to the professionality and the efforts of all 42 partners of the project and the leadership of Spanish Ports.

Link to article of El Vigía (only in Spanish)